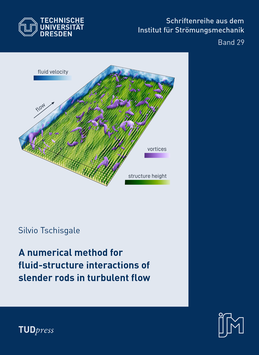 29: A numerical method for fluid-structure interactions of slender rods in turbulent flow

This thesis presents a numerical method for the simulation of fluid-structure interaction (FSI) problems on high-performance computers. The proposed method is specifically tailored to interactions between Newtonian fluids and a large number of slender viscoelastic structures, the latter being modeled as Cosserat rods. From a numerical point of view, such kind of FSI requires special techniques to reach numerical stability. When using a partitioned fluid-structure coupling approach this is usually achieved by an iterative procedure, which drastically increases the computational effort. In the present work, an alternative coupling approach is developed based on an immersed boundary method (IBM). It is unconditionally stable and exempt from any global iteration between the fluid part and the structure part. The proposed FSI solver is employed to simulate the flow over a dense layer of vegetation elements, usually designated as canopy flow. The abstracted canopy model used in the simulation consists of 800 strip-shaped blades, which is the largest canopy-resolving simulation of this type done so far. To gain a deeper understanding of the physics of aquatic canopy flows the simulation data obtained are analyzed, e.g., concerning the existence and shape of coherent structures.